[DONE] Convert Entity to another Type

I wanted to request the ability to move an entity to another type, perhaps by drag and drop or copy/paste? I have reorganized my Apps from time to time, and had some entities that were built out with descriptions, comments, and some related stuff, that were now in the wrong Type due to this reorganization. I would really like to be able to not lose this entity, or many entities if they all need to move to the correct Type. Right now the only way I can see to do this is to delete the Entity and re-enter it in the new Type.

This is related to:

I am used to being able to move issues/tasks from one container to another. As I move forward with Fibery and begin to treat Apps as essentially “containers” of data items, akin to Jira Projects, Wrike Folders, Teams in Asana, Products in Aha!, etc. it strikes me that frequently there could be a need to move an entity over to another container. There may be a way to do this elegantly given all your flexibility around relationships, parent/child hierarchy, etc., but for now I have not been able…

however, in this case I’m not talking about moving an entity all the way to another app…although I guess if you could move it to any other type in Fibery, not just a type in the same app, this would be the same thing as moving it to another app.

Wanted to bump this up as I am hoping it is something we will see in the future. The reason I am asking again is that as I build my Fibery, I am both working in it, and evolving the set up at the same time. So I am seeing a few situations where I’d like to adjust the set-up of Types and Apps, but in a few cases there are tens of entities I’d need to recategorize to do this.

Here is an example: I am tracking both “ideas” and “questions” for my team as entities. I set this up to try to capture thoughts and questions my team has on a daily basis, that would previously get buried in Slack or Email. Initially I was using one entity to track this, as I thought that was sufficient, with a select list to choose whether the entity is an “idea” or “question.” But this is really working well, to the point now that I can see I should really have an entity for both “ideas” and “questions.” One reason is that as the current entity that contains both gets filled, we are seeing a different dynamic about how we handle ideas vs. questions, for example they should go through different workflows. But if they are in the same entity, I have to use the same workflow.

What I’d like to do is filter the entities that are now categorized as “ideas,” and move them to a new entity type just for “ideas.” If I can’t do that, I’m faced with copying and pasting 10s of entities that are already built out with relations, comments, attachments, etc. that I don’t want to lose.

Moving entities across Types is like moving tasks between Folders in Wrike, or issues between Projects in Jira, which I consider basic functionality of a work management tool. So I’m hoping this is something you guys also plan and consider a basic feature.

Thanks as always for the consideration!

Hey guys, @mdubakov sorry to bother you but I wanted to bump this up again. Very curious about your thoughts here. I know this might involve some mapping that needs to happen because types have different fields, etc. But I am seeing this need a lot now as my team gets active in Fibery.

One situation is we have things that go in as a “Project” and it turns out they are really “Tasks” and need to be changed, but a lot of work has already gone into building the entity.

One idea here would be to “convert” the entity to another type, and then popping up a modal that would allow the user to select which fields map over. If you could in fact tie the two together via automation, you’d have a very powerful feature I’ve also requested:

[DONE] Convert entities of one Type to another Type Ideas & Features

Hi again, I was wondering about what might be a common situation with teams onboarding into Fibery, that I will for sure have: I’d like to first start “potential” entities in a flow - things like “employee candidate” or “Sales lead,” then as they get converted to “employee” or “Customer,” not lose the whole activity that has accumulated in the entity up till then. It strikes me that creating a related entity, so say a new entity of “customer” is created with the “sales lead” is closed, is a b…

This is great for something like Idea or Feature Request tracking. The original entity can have its state tied to the “created” entity. So for example with the Feature Request:

Thanks guys and really grateful for any insight you can provide, even if you don’t plan to allow moving Entities to different Types.

Guys, just wanted to try to find out again if you have thoughts on this. I imagine as the user base of Fibery grows I won’t be the only one with this issue.

For more context, this is a big piece of Jira, which I’m sure many Fibery converts have dealt with, and because of the massive customization you can do in Jira issues - which in many ways is one of the ways it closely resembles Fibery - there is an actual wizard that does the mapping, you can see it discussed in this article:

Here is a highlight: 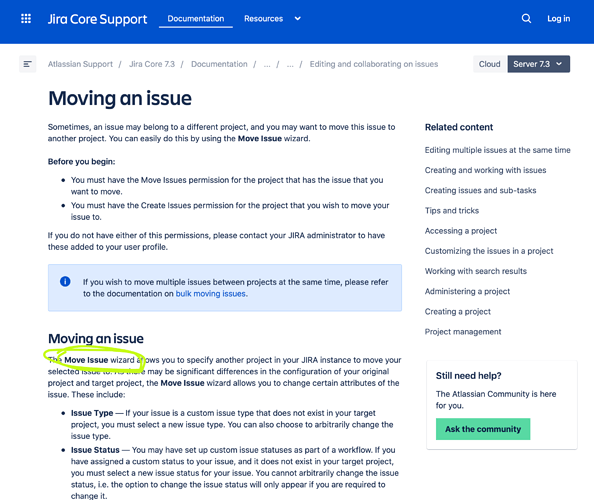 Thanks for the consideration and hoping to hear from you on this!

Hey, I just wanted to add one more point of context to this feature. I realize there are complexities given the mapping around different Types, but it is a need that arises a lot, that’s why I think Jira has a complex, but no question well-thought out, process around this.

What I wanted to mention is that this is also a downside of Notion and Coda, so again an opportunity to get out in front of them. With Notion in fact, you will lose all relations and properties, and it happens without practically any alert. If you click “move” your Page will just appear in the new Table, like one of the Pages in that table, and if there are no common properties, it will be empty. I’m sure that is not something that is helpful to Notion users who want to move Pages around dB’s!

Thanks guys and eager for any guidance on this one as I run up against it frequently!

Hey Guys, just wanted to bump this one too as I have not seen any official response to this. Seems like a common need. Just about any other tool I’ve used allows for moving the data record from one “area” to another:

As my Fibery instance grows, I have several situations where I’d like to move one or many Entities around as they are better served elsewhere. I think evolving your set up freely is one of the benefits of Fibery, and you guys let users do this more readily than other tools due to your flexibility. But it seems that you should also be able to evolve your data set up as well, and now, since Entities are locked essentially permanently to an initial structure, this is impossible.

Finally you can delete many records at once from Table View:

…so it would be great if you could also have the option with the Batch view to move Entities to another Type, with the remapping dialogue perhaps a part of that.

Hope you guys intend to bring this functionality out soon, would greatly appreciate guidance!

It also occurs to me that this could be handled if you guys were able to implement the excellent “Import Data” dialogue. I just used this now for the first time as I was building my Fibery Instance “clean” up till now. And I notice that it has all the re-mapping functionality already there.

So I’m hoping you guys could potentially utilize that more “in-app” in Fibery and with the existing Batch Select feature, there will be an option to simply move Entities to other Types. I could really use this as my Fibery evolves and I see new ways to optimize Entities, but they are stuck in the wrong Type. Thanks!

Yes! I thought about this too, that the “remap” functions are already there and well implemented (better than in many other apps!), but hardly get use, at least for me. Moving between types with a similar approach would make a lot of sense, I think.

Exactly, I just discovered this whole tool and the remap stuff is really well-executed. And you are right, I can’t use all of them because I’ve been using this to try to move my stuff in and out of Fibery, so those fields that can’t show up in “Table View” I can’t use the mapping for!

We have this in our backlog, but so far no estimates about possible dates.

+1. Ability to convert to another type would be very helpful. Especially for converting tasks to projects.

For now, we just use references to create task. Then, so in theory ― this still works since we can keep a record of where it came from.

Hi!
Done already, you can check the details here

Convert Entities to another Type Sometimes you need to convert Bug to User Story, User Story to Feature, Issue to Task, etc. Finally, you can do it via Convert action. [2021-04-08 15.39.11] Convert action is available from several places, like Entity View, Board View, Table View, etc. Here is the video that explains Convert action in some details. Notes: Original entity is not deleted after convert action, you can delete it manually if needed. Content is copied from the origina…

This is “done” but not all valuable features are actually there for converting. For example this:

the “remap” functions are already there and well implemented (better than in many other apps!), but hardly get use, at least for me. Moving between types with a similar approach would make a lot of sense, I think.

But also this from another, seemingly identical or quite similar topic:

[DONE] Convert entities of one Type to another Type

preserve all possible fields and somehow aggregate data from missing fields into text that will be attached to entity.

Emphasis is mine. I have a new, related feature request for that, one possible way to implement it:

I find myself using both CSV import and Entity Conversion to other Databases frequently at the moment. One thing I think would be really useful to have for both (at least when Entity Conversion gets Field Mapping), would be some form of temporary Formula-driven field type that you can create as part of the Field Mapping. This field should have access to the CSV Field names being imported and be able to operate on them just like native Field Types. You would specify a destination field type (text…