I would like to revive a subject from the April 20 Changelog re: customization of the great inline mentions we have in Fibery (one of the best features, please guys don’t change this it’s good as is!)

My request is only about what you can see about the Inline Entity, following on @mdubakov assertion here from that post:

So far it works for Assignments and State fields only, but we are going to expand it to be fully customizable.

My team makes great use of the Inline mentions, and at times we are seeing that we could definitely use some customizations. For example, we reference Users a lot, and they always bring in the name of the Avatar if they’ve uploaded one, so that takes up space in your copy unnecessarily: 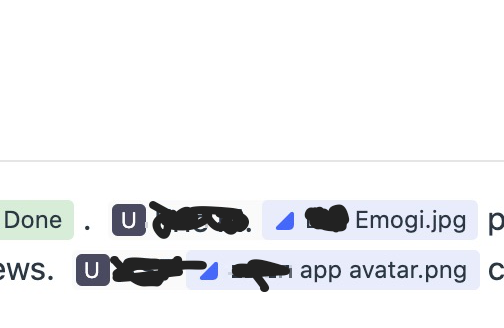 Also we have some other Types that could use the customization.

Just wanted to get this out as an official request in case others wanted to support it. Cheers!

2 Likes
Option to show field in reference and entity picker
Taking notes - entity inserted in a note or document shows the workflow state. Can I choose something else than workflow?
Show in Reference Highlights Referenced Entity more clearly
B_Sp February 3, 2021, 2:20pm #2

I wanted to add another use case around this request: Entities that are used as “Tasks.” A typical use of this would be to create follow-on tasks in Meetings, this may be done by the note-taker inline. It would be super convenient to be able to see the fields of “Due Date” and “Priority” inline and not have to open the Entity to scroll through the details and select these fields after first creating inline, which we found usually takes some time as the Entity details window can take a moment to open, and not everybody has memorized where those fields are. If you could simply have them available inline, it would make the filling out of those attributes very quick & easy.

This would truly be a unique feature of Fibery that I have never seen any other app even come close to. Others do have inline mentions, just none allow this type of customization.

The way I would prefer to see it handled is an option for every field to “promote to/display on in-line mentions”. That way everyone could display whatever they wanted in-line. Some people will want a lot, while the majority will not, but a system like that could equally serve both needs.

Yes and thanks for proposing an excellent implementation, hadn’t thought of that! This would also nicely keep this at the Type level. 100% what I had in mind with surfacing the request again!

The only comment I would add to this discussion is that it will be interesting to hear where you think the choice about which fields to display should be made.
I believe, for example, that when an entity is shown in a collection, you can choose which fields to display, but the setting is applied to every collection for that type. This means that your choice is tied to the type, rather than being determined by the referencing entity
This has some disadvantages, since one might want the choice of visible fields to be different in different places.

The same will be true for inline mentions. Will you always want the same fields visible in all the the rich text places where an entity of a given type is mentioned?

That is certainly an interesting and valid point. I know that there must be limits to the customization however and so personally I feel like a single global setting would be sufficient. Not perfect, but it would be up to each admin to balance the needs of the various areas where they use entity mentions. I could certainly envision a way to do it more flexibly, but I question how much value it would bring for the dev time and UI complexity involved. How many people would ever actually find and use that setting?

The way I’m getting on in Fibery is that I think I’d be Ok with being able to customize how each Type shows up when @mentioned across other Entities in Fibery, per @Oshyan ’s solution here. I have things like:

It would also be great to limit this from the default, as right now in fact because I get all those fields, the Rich Texts get overloaded, in particularly if I have added an assignment extension, but haven’t assigned anybody, I get a blank “circle” next to the referenced entity which just takes up space and makes the Rich Text busy. Likewise with the aforementioned State if I really don’t want to include it.

I think Collections are another animal with a lot more to talk about and improvement needed, like showing differing views in that area a la Notion, something @Oshyan also has talked about. But with mentions, I think there is a lot less need to customize.

I’m curious, when would you have a need to customize per entity which fields in an @mentioned entity are displayed?

This was one of the first things that came to mind when I started trying Fibery out. I really liked the inline mentions of entities, but found that often you are forced to overwrite the Name field with a formula to expose information from the entity without this feature. This results in an odd user experience where you add a new entity quickly in some view, but can’t set the name. So you have to open it up to set the values that are used to create the calculated name field.

I’d be ok with a starting point where there is some global configuration for how each Type shows up when they are referenced anywhere. Then, later on down the line worry about having different configurations in specific contexts.

In your specific approach to addressing the ‘show custom information’ problem, by using naming formula, if you assume that is the best approach moving forward (i.e. let’s assume no additional customization options are added for in-line entity info display), then how would you want the “can’t set name from inline mention” problem to be solved?

I was thinking about inline references in the context of blocks and I thought it would be worth it to bump this thread up again and hopefully get it tagged as related to “blocks” and linked to the block-based rewrite of rich text fields [IN DEV] Migrate Entity View to Blocks.

As discussed in the thread above fibery currently shows inline entities in a very particular/fixed way:

While the inline reference is quite powerful, the inability to customize it is a real paint point for me. One of the suggestions/workarounds has been to either manually include some of the details in the name or use a name formulas so that the information at least remains dynamic. I think this approach is very problematic because now the entity name is not really the entity name but an amalgamation of a few different fields. There can also be different contexts in which the entity needs to be referenced where some of this information is not needed or desirable to be visible. Finally, I think this approach adds additional complexity, duplication and an opportunity for contradictory and out of sync information to be added.

The above approach enables some really helpful customization such as:

I think a template approach would be the best way of addressing this so that the admin/designers can determine what makes sense for their users.

4 Likes
Allow user to specify content of Rich Text field when creating a new entity via Button
Q: What are your top 3 missing things/features in Fibery?
mdubakov October 25, 2021, 8:18am #11

we have very similar ideas in mind, thank you for the images, it makes the solution much easier to understand and feel!

These are some great ideas! Seems to me like 3 related but different features:

I think these are all good concepts, and I have some further thoughts on #1 (though some of my concerns may be irrelevant; I’ll leave it to Michael and team to determine that

I think the most obvious and hopefully easiest thing to implement here would be using the variables for each field name, much like the formula editor does. In fact a formula editor-like experience would be great, but even just a one-line input field for specifying each “template” (with a separate field for the name of the template I guess), and in-line search/auto-complete would work well I think. So it’d be something like [Name][Creation Date][Created By] would produce e.g. Task one 13/7/2021 Oshyan or if you wanted to get a little fancier, [Name] created on [Creation Date] by [Created By] = a reference that reads: Task one created on 13/7/2021 by Oshyan. And any field where it makes sense to allow interaction would do so (this could be something additionally controllable, but it seems overkill in my view).

It’d be even easier if it were a dedicated UI like the formula editor, with a list of available field names, etc. I imagine that should be easy enough to implement as well. But basically I favor a super simple implementation of this, akin to what programs like Lightroom have done for their variable-based file output naming options. Something that is flexible and powerful and simple enough to use, but won’t take a long time to implement (hopefully).

Probably you’d want it to just default to the selected default template. Which would be specified in the Type definition somewhere I guess. And then have an option on every reference (in e.g. a rich text) to change the template used for that particular reference.

Implemented in the latest release

Customize Fields for Entity mentions [customize-units-mentions] Wouldn’t it be nice to see something apart from the name of a mentioned thing? Maybe not even State or Assignees but something different? Customize Fields for each Database to provide readers with more click-free context: Due Date for Tasks Customer and Customer Status for Feedback Notes Amount and Probability for Deals (you name it)