Combine Columns (or Rows) in Board View

I sometimes have boards set up that have entities from different databases with different states, but would still like to view them on one board.

It would be nice to be able to group columns to make things clearer, for example everything that’s in a ‘done’ state could go in a combined column even if some of the states are ‘done’ or ‘successful’ or similar. Otherwise I end up with 2 or 3 columns containing entities on a board taking up screen space: 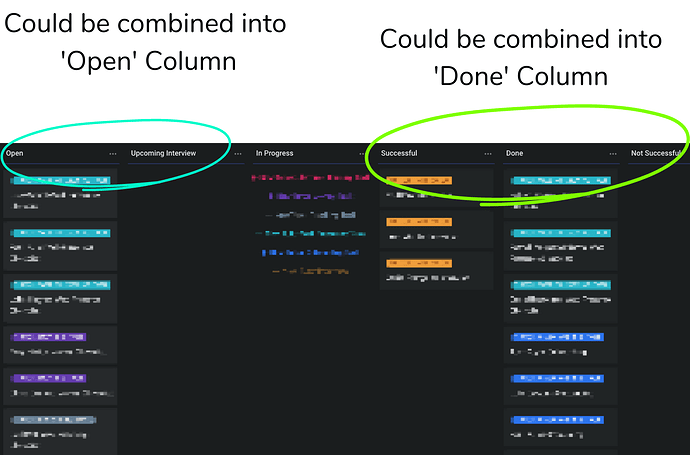 I know this could cause issues with dragging and dropping entities if two columns from the same database are combined, the simplest solution being to only allow combining columns from different databases. This is similar to the current functionality that won’t allow creating an entity in a state that doesn’t exist for that database. A better solution would be to have grouped columns split vertically based on the state.

This would give very flexible high level views of various workflows, and could be used for people managing multiple projects/staff.

Best case:
You can combine columns from the same database or different databases.
If you click on create a new entity (problem if two databases), or move an entity to a combined column (problem if same database), a small drop-down field could up with the options you have, e.g. asking:

Although I don’t think this is very important, but I guess that’s subjective.

There is a way that you can achieve something close:

In this case, both databases have the same state options (Start, In progress, Done) but these can be considered the ‘superstates’.
The states also have a ‘hidden’ text field, which is the ‘substate’, and this value is different for the different databases (at least for the Start and Done superstates).
This field is then shown for each column.

It’s not ideal when working in entity view, since changing state relies on picking the name of the superstate (the substate field is read-only) but if you primarily work in board view, it might be an acceptable workaround.