Name Formulas are awesome, with one big exception: when creating a new entity “in line” (where you see this)

The problem is that 90% of the time, I want to save whatever the user enters here, maybe in a field called Title, to be used as part of the Name formula.

The simplest solution I can think of is to have a special field in Rules, something like UserEnteredName, which holds whatever name the user entered when creating the entity inline.

This is an interesting idea and would be helpful (I have quite a few of these placeholder fields like title and subject).

Although I am wonder If it wouldn’t make more sense to revisit Ask user input for rules. I assume the same issue would exist in terms of entities created using automations rather than actual users. I think this would give us a more complete solution as there may still be multiple fields that go into a name.

My specific use-case for this is when a user is moving fast doing something like taking meeting notes, and they want to be able to create entities inline in a Rich Text field without pausing to fill in additional fields/popups.

In this case, it would be very useful if they could simply type in that new entity Name/Title/whatever , and have it saved/incorporated into the entity somehow, instead of having it just disappear into the ethers, and without having to open up a new panel or popup and fill in additional fields at that moment.

I could automate this by making the Name field a regular (non-Formula) field and using Rules to set it whenever its components fields change (and I will probably end up doing just that), but I think my suggestion would be a cleaner and easier-to-maintain solution.

I could imagine that it would be nice if the dialog box that comes up when a user chooses to make a name generated from a formula included a dropdown box to allow the user choose an alternate (text) field. This field would be the one that would get the text that is typed when an entity is created in-line. 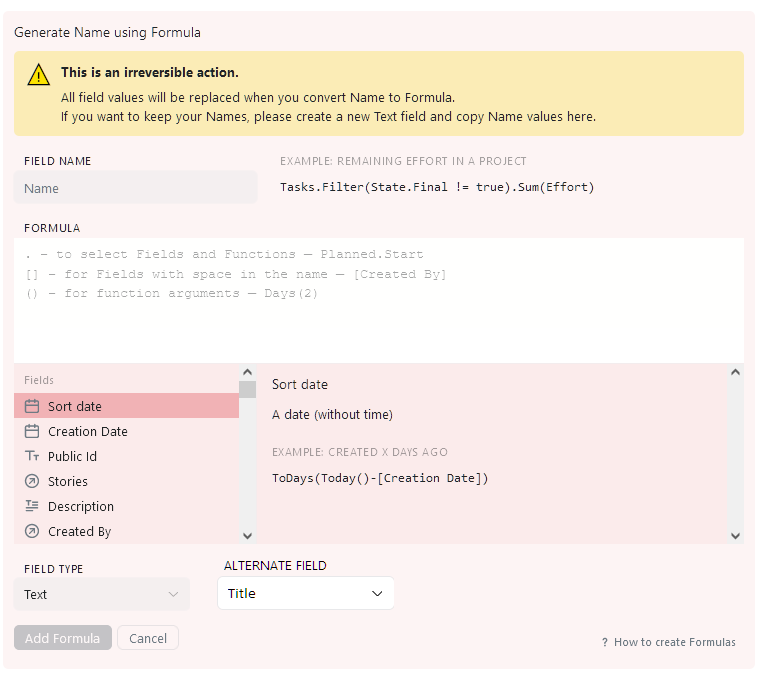 The problem now is that creating new linked entities is very weird. If a user types a name to create a new user, the name is briefly shown. But the input is not captured in the new entity because the Name field is a formula.

But the result will be an empty entity and the input string is lost.

Users find this hard to understand. It would be very easy to solve this by setting a Default text field in the database. Instead of capturing the new string in the Name field, Fibery would place that text in the field marked as Default. I could then set First Name as the Default field and tell users to only type the first name on creation of a new Person entity. And then they can fill out the rest later.

We have this problem in a backlog and quite many people gave feedback about frustration of adding entities with generated names. Technically, Name field is default now, but we’ll think what we can do here, there is no fast and easy solution it seems, so we kinda procrastinate on this problem…

I am having the same issue and it is related to my other request about creating child items directly from the parent item. it seems that if there was a way to open a side pane for creating a new item (the same as when you select an existing item), this could solve multiple problems. You can simply input the appropriate fields to generate the name formula. seems like maybe a more universal solution. is there something major behind the scenes that would complicate or prevent this?